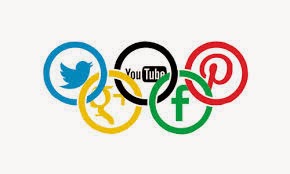 Fast-forward two years later and social media was center stage at the 2014 Winter Olympics. So much of this year’s games were played out on social media and the updates featured not just the results, but many of side stories that became headline news.

USA Today sports reporter Kelly Whiteside, wrote this article “If London Was the Twitter Olympics, Sochi is the Viral Games,” about how the earliest news from the games was not the first athlete to earn a gold medal, but rather the horrible conditions reported by the media as they arrived in Sochi. The hashtag #sochiproblems quickly began trending on Twitter.

It is probably safe to say that many of us first heard about the wardrobe malfunction of Russian skater Olga Graf and the bobsledder Johnny Quinn getting stuck in the bathroom via Facebook or Twitter.

And there was another role for social media during this year’s events – security. BAE Systems partnered with Homeland Security Magazine for a daily analysis of social media to find “trends in the public dialogue around security, infrastructure, transportation, cyber events, and environmental concerns.”

As the world watched their favorite athletes compete, they also witnessed many other events unfold via social media. I believe these types of events underscore power of social media today and how easy it is for something to go viral whether we want it to or not.

Social media is no longer a separate tool in the public relations toolkit. It is an integral part of sharing our messages and communicating the most important and interesting things to among our key audiences.
Posted by Meredith Bagnulo at 2:36 PM No comments: